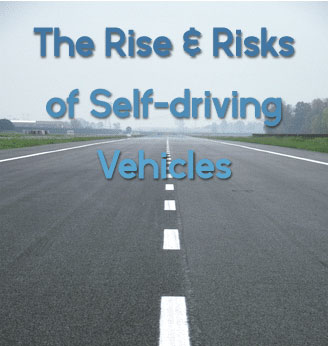 Home » The Rise and Risks of Self-driving Vehicles

The Rise and Risks of Self-driving Vehicles

The possibility of self-driving cars isn’t quite ‘news’ anymore. Google has been testing and using the technology near one of their California hubs since 2009. Now, seven years later, this technology is becoming more and more accessible and many other companies are either beginning to use it or invest in the technology itself, including Mercedes-Benz, Google, Tesla, Audi, Nissan and more.

While autonomous or self-driving vehicles can bring benefits, as with everything, they bring their own set of ‘cons’ as well. High levels of uncertainty currently surround the issue, but the critical role that AVs could play regarding the economy, mobility, and society as a whole could be weighty.
There are a variety of reasons why the self-driving technology won’t be on the market for widespread use for at least another 10 years.

Laws and regulations must first be put in place so that insurance can be developed to cover risks associated with the technology and the risks must be understood.

Currently, most AVs aren’t yet fully self-driving nor for sale commercially. However, AVs are already a reality in selected environments, such as mining and farming. In these cases, the restricted nature of operations and the possibility to operate on private roads makes risks more acceptable.

It has been predicted that a majority of cars could be self-driving around 2045. Until then, insurers can be storming up ideas for coverage because it will have a significant impact on personal lines auto insurers.

Auto insurers have provided consumers coverage in the event of accidents caused by human error. With driverless vehicles, auto insurers might shift the core of their business model, focusing mainly on insuring manufacturers from liabilities from technical failure of these vehicles, as opposed to protecting private customers from risks associated with human error in accidents.

You can imagine the possibilities of the technology in regards to a need for a different insurance policy than a regular vehicle.

For example; what if the mapping technology in place is not sufficient? On February 23rd, 2016, Google’s self-driving car caused its own first wreck, due to deciding to move around sandbags it had detected around a storm drain in the lane it was in.

Other questions arise about the safety of the vehicle, including a cyber attack or hack into the system. While it has been found possible to hack into these systems, preventative systems have been made that can apparently react quicker than you could if you were in the car and took it over manually. “The protections we developed are real time,” said Dan Park, chief technology officer and co-founder of Mission Secure. “Where once there is a threat perceived, the system will engage, and it will be able to engage faster than a human.”